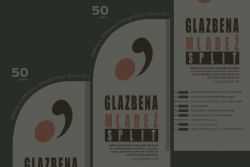 CRO PATRIA is a unique project on a global scale which promotes choral singing and contemporary choral works organized by Musical Youth of Split. It is an international project in which choirs, composers, poets, members of prize-awarding committee from Croatia and other countries take part.

This programme tries to encourage contemporary, artistic valuable creativity in music and poetry so each segment has special prizes and medallions – work of Croatian academic artists.

The festival is supported by: The President of the Republic of Croatia, Ministry of Culture, Split-Dalmatia County, City of Split, Tourist Board of Split and Croatian composers’ society.

We invite composers to apply to international competition for the new choral compositions in 24 International Choral Festival CRO PATRIA 2020.  Applications will be accepted until March 15, 2020.

The competition is open to choral compositions unaccompanied by the music for mixed, male, female and children’s choir written in any language, with the maximum duration of 5 minutes.

Compositions will be judged by an international prize-awarding committee. The decision of the committee is final and it cannot be appealed. Judging is divided into two phases.

In the first phase the committee will decide which compositions will perform in 24 International Choral Festival CRO PATRIA 2020.

The organizer will inform the author about the acceptance of the composition until 1st of May 2020. The author guarantees that, by the end of the Festival CRO PATRIA 2020, applied and by the committee chosen composition will not be performed in public.

In the second phase of the competition the prize-awarding committee will award three best compositions.

The author of the winning composition (composition awarded with gold medallion Canticum novum) will be also awarded with the money reward of 500€ and will be invited into prize-awarding committee of the tender for new choral compositions of the next year’s Festival.

Best new composition by young The award does not include money reward.

Organizer will do the best to arrange performance of each composition chosen in the first phase of the competition. Sending an application and taking part in competition implies accepting these terms.